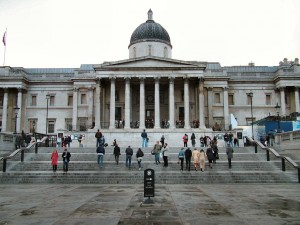 Originally sited at 100 Pall Mall – a private townhouse – the National Gallery opened in its current Trafalgar Square premises in 1838. Being situated in the ‘very gangway of London’ is a key element of the National’s raison d’être. As Mr Justice Coleridge wrote in 1857, the Gallery should meet the needs of “that large class of persons very moderately acquainted with art, very desirous of knowing more, very much occupied in business, who have occasionally a half-hour or hour of leisure, but seldom a whole day.”

It remains an immensely handy gallery for the visitor with a spare hour or two on his hands. The free entry and accessible layout mean that you can pop in, have a quick gawp at a masterpiece, and pop out again. In an occasional series, The Dabbler will be looking at some favourite ‘National treasures’ – paintings which we think are well worth popping in for if you happen to be in the Capital – starting here with Bruegel’s The Adoration of the Kings… 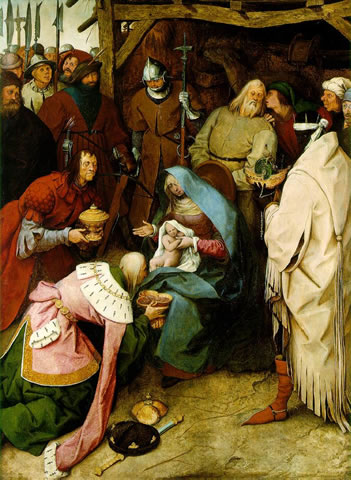 Pieter van Bruegel the Elder is best known for his large, peasant-filled landscapes, so this scene of the Magi offering their gifts to the infant Christ is a rare ‘close-up’.

For something painted in 1564, its irreverence is gobsmacking – or at least, it seems so to modern eyes, conditioned as we are to thinking that humour and Christian worship are incompatible, and to the Whiggish belief (lambasted here by Recusant) that pre-Enlightenment humans were puny-minded simpletons of a different species to clever old us. In truth, irreverence has mixed quite happily with piety for much of Christianity’s history. The medieval church accommodated all human life, gargoyles gurned from the masonry and beneath Brothers’ bottoms carved misericords depict all manner of bawdy scenes, from drunkenness to mooning.

But even given this knowledge, Bruegel’s irreverence is still gobsmacking, especially in the context of a Gallery full of holy scenes. Joseph – tubby, lankhaired – is as common as muck, sharing some gossip or other with an ear-bending neighbour. Jesus himself is a cheeky wee scamp; he eyes the kneeling Magi with a knowing smirk. It is said of this painting that all the bystanders are staring at the treasure rather than the infant Christ and thus Bruegel is satirising human greed. I’m not so sure about this: they seem to me to be just generally gawping at the toffs and the palaver, but they are certainly caricatures – check out the chaps on the far right, one with comedy spectacles, the other a personification of shameless nosy-parkery. They rather remind me of the Beano‘s Bash Street Kids.

Yet despite the irreverence, it is not a sacrilegious painting. Mary has a serenity about her, emphasised by the crafty halo created by Joseph’s hat. Above her head, the soldier’s pike rises in a straight line to crown the scene with an ominous Christian cross.

For me, the key to the sense of the painting is in the Kings themselves. According to the National’s website, “the elongated figures of the Kings are characteristic of a painting style that was fashionable around this time”. Maybe so, but why are the Kings’ robes so comically over-elaborate: ill-fitted to their spindly, Mervyn Peake-ish frames and dragging inelegantly in the mud? Why the cartoonish faces (two are decrepit, the other more of a guileless naif than a Wise Man)?

My take on it is that Bruegel is poking fun not at the Christian story itself, but at the Kings’ pomposity and presumptuousness in turning up in the role of Great Men – and thereby he is poking fun at man’s pomp and circumstance in general. This, in a way, is a very pious sentiment: the Kings are no better or worse than the peasants; only Jesus and his mother should be revered.

If you would like to submit a post about a favourite artwork – either in the National or in any other gallery in the world – do email editorial@thedabbler.co.uk

11 thoughts on “National treasures – Bruegel: The Adoration of the Kings”