It’s the time of year when people dress up in all sorts of strange costumes for Halloween parties. I was reminded of Nige’s closing comments in a post a while ago when I read about the Washington DC Drag Queen Race. Apparently this is one of the area’s more unique Halloween events: “Each year on the Tuesday before Halloween, thousands of spectators flock to Dupont Circle to watch costumed drag queens show off their elaborate outfits and race down 17th Street. The informal block party lasts a few hours and attracts a diverse crowd”, as can be seen from the photos in this post.

Despite my love of dressing up, the idea of cross-dressing has never really appealed. Not because I’m against that sort of thing. As far as I’m concerned, each to their own so long as it doesn’t offend, and isn’t an unworthy use of tax payers’ money. And, having worked in the fashion industry, I’ve met quite a few transvestite types in my time. Marginalized by their unconventional taste in clothing, they’re a peculiarly secretive and somewhat old fashioned bunch – with the notable exception of the national art treasure and curiosity that is Grayson Perry, of course.

Anyway, recent research has confirmed that most transvestites aren’t homosexual, so they’re genuinely inhibited when it comes to buying women’s clothes. What heterosexual man wouldn’t feel uncomfortable walking into a ladies’ clothes shop and trying on dresses? But now the advent of online shopping has changed all that, and men can buy larger sized shoes and clothing without having to suffer the embarrassment of finding themselves in a communal ladies’ changing room… hem, hem.

One website claims that “Being a modern cross-dresser is a great deal more acceptable in today’s society than ever before and it can be extremely fun and exciting to…really show and express your outer self and alter ego with impressive and realistic results – whether you need a new lipstick, a stylish wig, some sexy boots, silicone breast forms, exotic party dancewear, sissy dress, fancy dress outfits, disco clothes, sexy leather clothing, or kinky costumes.” 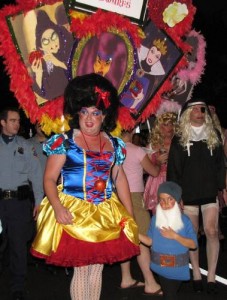 But herein lies the problem. A wig is almost always obviously a wig. Jellyfish like silicon bra inserts will never look entirely realistic. Men who cross-dress invariably opt for high-heeled shoes, which they’re not used to walking in, so tend to teeter along the pavement – the sort of impracticality most women go out of their way to avoid. Men dressing as women also want to appear as feminine as possible, and are likely to choose frilly dresses with lace and ribbons, petticoats, corsets, girdles, stockings and suspenders. They insist on wearing false eyelashes and low cut tops – and end up looking like a cross between Dame Edna and Barbara Windsor.

In Wendy Jones’ biography, Grayson Perry: Portrait of the Artist as a Young Girl, Perry says, “I learned that it is rare to meet a transvestite who is convincing; most aren’t credible, they are blokes in dresses with wigs on. The stereotype is a man in his fifties in old-fashioned women’s clothes, perhaps a knife-pleated skirt with tan tights. Trannies are part-timers, they’re amateurs…”

Seeing man-sized bodies squeezed into outmoded women’s fashions can be a decidedly scary sight. Yet, in terms of tranny style, not a lot has changed since the wonderful impersonator Dick Emery’s day…

Even with the benefit of today’s cross-dressing makeover services, men will always be dabblers in the art of female attire. However, the most scary thing isn’t seeing a man dressed up as a woman – it’s when she looks just like a woman, but is in fact a man.