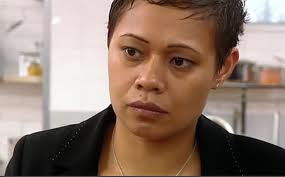 Masterchef: The Professionals is reaching its annual climax: it’s the semi-finals this week and the finals next.

I find it a hugely satisfying piece of television not just because I’m a gourmand. Unlike a number of other reality TV competitions – such as the totally revolting Apprentice – the contestants are forced to stay grounded and honest if they want to succeed. This is because they are being asked to prove themselves at a professional level in what is a demanding and intractable pursuit.

Cooking is one of the arts but in some respects it’s not unlike sport. No matter how attractive, charismatic, confident or unscrupulous a gymnast is, if she can’t pull off her double-back-flip she’s not going to win. You can’t blague that. Likewise, as a chef, if you haven’t got the culinary technique or the palate, there’s nowhere to hide – especially when the expert judges are of the calibre of Michel Roux Jr and the extraordinary Monica Galetti (top, whose combination of good looks and intimidating presence reminds me, only a little incongruously, of the former All Blacks centre Tana Umaga, right). This is just as true of the stars of the profession: despite his gob, even Gordon Ramsey ultimately succeeds or fails on the quality of his food.

It’s cooking’s ability to find people out that’s been such a satisfying feature of this series. Almost every one of the four weekly qualifying rounds has featured at least one young man (always a man) who’s confidently stated he’s going to win the competition. He’s put his inevitable success down to his simply being the best. The words ‘belief’ and (yawn) ‘passion’ may have been mentioned. Well, each of these cocks of the walk has ended up as coq au vin. Far from being the best, they’ve lacked some critical skills and/or haven’t been able to withstand the pressure. In fact, they’ve nearly all cratered; we’ve witnessed quite a few tears rolling down big boys’ cheeks.

It struck me that these over-confident young men had probably adopted their approach from sport: we’re told repeatedly nowadays that self-belief and the visualisation of success are critical elements in winning. However, what they hadn’t appreciated is that this is the icing on the cake; it’s a psychological approach that’s only likely to pay dividends if you’ve already honed your technical abilities. And there’s little chance that they’d already be in possession of the skills of a Michelin-starred chef (they wouldn’t be in the competion if they did). The upshot is that far from adopting a winning mentality, they’re merely engaging in empty boasting – which sad and embarrassing conclusion may have contributed to their post-rejection weepiness.

However, it’s not just those seeking to imitate sportsmen that can get it wrong. Seeing these young chefs collapse under the unsupported weight of their own expectations reminded me of nothing more than the evident embarrassment we witnessed on the faces of the underperforming England football team at the last World Cup. I guess you have to credit Fabio Capello for doing what he could to restore self-belief. However, at that stage it’s probably beyond the abilities of any coach to address deep-seated technical failings.

So who has qualified? Without exception it’s been the quietly confident. The semi-finalists have been sensibly self-critical as well as realistic about their progress and chances. Whilst some have been hand-shakingly nervous, each one has had sufficient self-belief and application to take them through. But this has been allied to the humility required to look, listen and learn. In summary, they seem entirely admirable people, in possession of that elusive, know-it-when-you-see-it quality of character.

Masterchef: The Professionals is great television, not least because it inhabits a universe where justice prevails and people get what they deserve. Bullshitters are exposed before the hot flames of the gas-burners and, whilst the meek don’t inherit the earth, the humble do appear to inherit the Michelin-starred kitchen.

The final programme 0f the semi-finals of Masterchef: The Professionals goes out tonight at 8pm on BBC2.

8 thoughts on “Nowhere to hide”