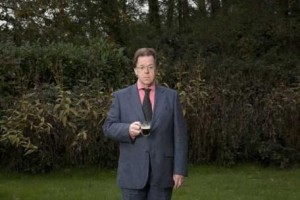 “As a writer and broadcaster about the arts, Jonathan Meades is essentially a nightmare that is happening to the spinning cadaver of Kenneth Clark.” Clive James

Where is Jonathan Meades? In the mid Nineties, he seemed ubiquitous. Turn on a TV in the evening and he’d probably be there, caricaturing himself. A stuffed suit, talking about architecture whilst standing sideways-on in a field looking at a cow. Then he slimmed down, and the transmissions petered out.

Incisive, with the best of judgement, the standard Meades televisual schtick was to deliver a non-stop stream of meaty pronouncements. As each perfectly boned and filleted trope flashed before you, it was whisked away almost before you could grasp the perfection of the execution, and in the meantime, even more excellence thundered past before you’d practically noticed. The man in the suit, who played with all the conventions of presenting, delivered lines in a loud lugubrious monotone, as if he had become too bored with our modern existence to partake in it himself.   Many lines were disdainfully delivered facing away from the camera. Yet this breakneck agility and ice-cold intellectualism was always leavened and made palatable by the addition of his trademark comical Magritte-infused surrealist tableaux.

With his quick soundbites and jokey visuals, you’d think Meades would be perfect for the YouTube generation – so it leads me to wonder why we don’t see more of him about. He would be an ideal candidate to ‘do a Clive James’ and attempt to make a little online media centre to put out short films on pertinent topics. Surely there’s plenty in our current society to raise his ire and offer itself for dismantling. Luckily there’s a whole section of YouTube, the ‘MeadesShrine‘, dedicated to his work. Well worth seeking out. Here’s the start of a series that leads on nicely from Gaw’s Future Post of yesterday: