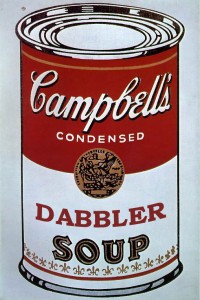 Dabbler Soup is our new food and booze feature. We’re hoping to bring you guest posts from some of the top bloggers in the gourmand/gluttony area. Inevitably there’ll be a distinctively British flavour to Dabbler Soup, so for the debut Worm kicks us off with, appropriately enough, Fish & Chips…

Alighting at Tynemouth there’s a jostling flea market filling both platforms of the station. Amongst the Lloyd Loom laundry baskets and cracked chamber pots, there’s lots of Nazi memorabilia on sale.

Fighting the urge to buy an SS dagger from a man with a tattoo on his face, we push out into the North Sea air. Tynemouth is genteel and full of tall hedges. Above the black harbour, the ruined Norman priory skulks on Benebal crag. Saints and kings lie here. Viking blood is soaked deep into the soil.

Even though I am amazed to discover a thriving surf scene in this upmarket northern outpost, it doesn’t take long to exhaust Tynemouth of all its wonders, so we walk along the estuary to North Shields, where the briny breeze warns us of the approaching Fish Quay. Right in the middle of a row of identical establishments, Kristians is somewhat of an institution in these parts apparently. I wouldn’t know – it’s only my second time north of the Midlands. I keep quiet, trying not to draw attention to myself, as I’ve already noted that I seem to be the only man around here with a hairstyle. 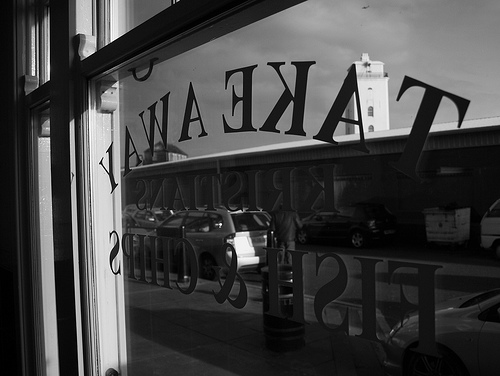 Inside, there’s two halves to the business, a restaurant, which is surprisingly full to the rafters with sweating, shouting chinese families, and the take away proper. Not wanting to queue we take the away option. We are funneled up ramps and around metal barriers like football supporters. All surfaces are hose-downable.

The young blond girl with dead eyes and deep fried hair gives us plenty of crispy scraps without being asked. She apologises profusely when handing over sachets of tartare sauce, ashamed at having to ask a whole 10 pence for two of them. Gauchely I ask for four. A man with a squashed nose mutters something behind me in the queue and his family all snigger.

Wondering what dreadful decadent southern perversion the over-consumption of tartare sauce signifies to the natives, I scurry out, and as we reach the seafront, then sun breaks the clouds. We sit squinting ahead. Beneath us in the jumbled concrete breakwater, rats skip and gamble around our feet, whilst overhead dirty gulls wheel and screetch. The piece of cod I’ve been given is over a foot long. The fish, torn with fingers into great pearlescent lugs, running with molten hot beef dripping, is excellent. The mountain of accompanying chips are the very pinnacle of chipfection. Not too fat, crunchy on the outside and meltingly soft in the middle. The peas are mushy. It is all marvellous.

The view back towards Newcastle is flat and featureless. Somewhere out there Gazza is stumbling around with a golf bag full of whisky bottles, looking for his pal Moaty. Over our shoulders, Collingwood’s monument scowls down on us and the Black Middens rocks at the entrance to the Tyne, where hundreds of sailors have drowned over the years, only a mile or two from their homes.