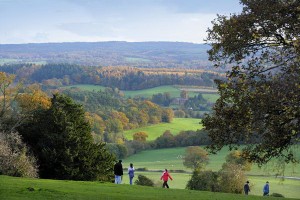 Surrey has a famously undistinguished architectural history, at least in terms of grand houses or fine medieval churches – but it had its brief golden age, when a clutch of architects of the late 19th and early 20th centuries became fascinated by the riches of its vernacular architecture, got to work on existing buildings, built new ones inspired by the ‘Surrey style’ and, in at least one case – the great Edwin Lutyens – fed that traditional stlye into a new, distinctively modern architecture, with beautiful and brilliant effect. Lutyens and his followers, and the great garden designer Gertrude Jekyll, worked most intensively in the area Miss J christened ‘Old West Surrey’ – and it was there, in the villages of the Surrey hills southeast of Godalming, that I was walking this weekend with my son. At first we were blessed with golden autumn sun, bathing the rich countryside in a mellow bountiful glow, lighting glorious views across the Weald to the South and far off into the misty distance. This weather alas didn’t last, but never mind…

The country we were walking is one of wooded hills – beech and oak – with ancient lanes and tracks cut deep into sandy soil, exposing great serpentine edifices of beech roots and tree promontories overhead. Villages are scattered and strung out, some without even the traditional nucleus of church and pub, and those at any distance from the main roads can feel quite remarkably remote. They also reek of money – largely as a result of the efforts of those architects who turned west Surrey into such a dreamily desirable rus in urbe, the top choice of retreat (or dormitory) for prosperous London professionals. The irony is that those once humble cottages that inspired Lutyens and co are now the dwellings of  (roughly speaking) millionaires, and the grander houses, built high up with ample grounds and wide sweeping views, are no doubt the preserve of multimillionaires. Still, there is nothing to stop the rest of us strolling through these cosy villages, admiring and mildly lusting after those tile-hung, half-timbered brick and Bargate stone houses that, at their best, look as though they’ve been there for ever, have grown from the bosky Surrey hills, organically evolving over centuries of habitation – but in fact to a large extent owe their seductive appearance to the sensitive modifications and enlargements of those turn-of-the-20th architects.

Our walk ended with a building that leaves no room for doubt that Lutyens at least was an architect of true genius and outstanding originality. Tigbourne Court, an early masterpiece of his, is a house with a dramatic U-shaped entrance front, great curving single-storey wings sweeping out at either side, crowned with immensely tall paired chimneys. The main house has three gables over three extremely tall and elegant windows over a low plain Doric loggia. The overall effect is simply breathtaking, marred only by the fact that the house stands right on what is now the very busy Petworth road, loud with passing cars. Tigbourne looks best from the far side of the carriageway, but cross over for a close-up view and marvel at Lutyens’s use of vernacular materials and techniques – the Bargate stone used to imitate brickwork, the cheery galleting (chips of dark stone in the mortar), the courses of thin tiles set flat, often in herringbone pattern, that continue right around the house… But enough – you must go and see it for yourself. Or, if you’re driving down that wretched road, turn off, park up and stroll back, and admire this building so startlingly and joyously beautiful it almost silences the traffic. This is the Surrey style in exelcis.

Footnote: There’s another reason to head for the wooded hills of Surrey just now – the wild mushrooms. My son and I came back with some spectacular specimens of that plump beauty the cep. Sadly he later discovered that half of them were maggot ridden. The other half though – delicious! Surrey ceps!