In Anthony Burgess’ short story The Endless Voyager, a businessman throws away his passport and wallet mid-transit and, unable to enter any country, spends the rest of his life shuttling from airport to airport. He eventually goes mad. Today, of course, such a traveller might stave off purgatorial insanity by dabbling on his iPhone or netbook.


In this post, the Anglo-Aussie blogger extraordinaire ZMKC – view her excellent site here – selects the six cultural clicks that might sustain her in an interminable succession of departure lounges.

Click 1
If I were stuck in an airport forever, I would make my first net stop at St Custards, a site dedicated to the wisest book I’ve ever read. ‘Reality is so unspeakably sordid … it make me shudder’ it says at the top of the home page. How exceptionally true those words would suddenly seem…

Disappointingly, the site does not contain my absolutely favourite passage from Molesworth, the scene when his mother’s school friend comes to visit:

You are expected to be xactly like wee tim especially when mater’s grate skool friend mabel entwhistle (prothero that was) pay a visit with her tiny dorter chiz chiz chiz. On that morning all boys cats dogs parots sparos and owls are turned into the garden while house is polished and mabel entwhistle’s foto is brought out of the boxroom. Boys glue their noses against windows and are finaly admited.
‘Do not the house look luvly, nigel’ sa yore mater.
‘But it never look like this reely it is just an empty facade.’
‘O.K.,’ sa youre mater. ‘But let’s keep it that way, see? Otherwise there’s liable to be trubble. Look at yore knees.’
i do not kno why boys are always told to look at their knees it is dashed dificult. In fact the only way is to lie on yore back and pull yore knees up. Maters, however, are liable to get batey if you do this in the sitting room just before ma entwhistle arive becos they see wot is on the soles of yore shoes. Too repulsive, my dear.
Procedure: Ho to the bathroom. Out flanel and wipe geting most off. Brush front of hair and leave back. Gaze in mirror at yore strange unatural beauty. Report hopefully. Back agane. Scrub nails. Leave tap runing and soap in bottom of basin. Sa look at ickle pritty to molesworth 2 who hav to put on blue corduroys cheers cheers cheers cheers. Report back and granted certificate of hygene (ist Class Honours) also gold medal antwerp exhibition 1899.
Pijaw. Mater then give pi-jaw e.g. Now you will behave nicely won’t you nigel and you won’t do wot you did to cicely last time.
Oh no mater rather not.
You promise?
Oh yes and i will sa nothing about her dolly either.
And you will not shout Cave Cave here they come when they ring the bell? You will not repeat wot Daddy sa at breakfast about mabel entwhistle? Nor sa rice pud ugh at lunch?
No No dearest mama perish the thort.
You had better not, rat.
The works. Mabel entwhistle arive in a super car a bentley or aston martin which show that mr entwhistle have a clue or 2 which is more than pop hav. Women thro themself into each others arms like guided missiles.
‘Darling darling (chiz) how lovely to see you after all these years.’
Visitor then gaze about as if she have never seen anything more beaituful in the world in space.
‘How swete your house is!
(Thinks: a dump)
nigel! this must be nigel! Wot a good-looking boy.
(Thinks: Ugh.)
‘And your younger boy how luvley.’
If anyone can call molesworth 2 luvely you know she is telling a whoper even blue corduroy trousers do not make him into bubles not by a long chalk so it show how empty and artifical ect. hem hem.
Enter CICELY entwhistle.
YOUR MATER: ‘Ciceley! She’s already a beauty. Such hair Such eyes’ ect.
(Thinks: Gosh wot a plane child.)
And so it go on the lunch is cold molesworth 2 drop the sprouts ciceley can’t eat the steak and all larff wot screams children are to be sure ….’ )

All the same, just looking at Nigel Molesworth’s nittish face would give me pleasure. 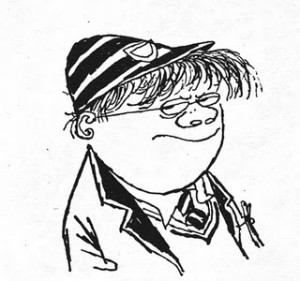 As well as that, remembering that Molesworth’s creator, Ronald Searle, spent the war in Changi and working on the Burma railway and yet managed to keep enough joie de vivre to invent the whole St Custard’s universe afterwards would be helpful. If Searle could remain sane and full of humour after such events, then I should be able to keep myself cheerful in the infinitely more comfortable surroundings of a modern airport.

Click 2
And, to remind myself, that not everyone would consider the place particularly unattractive, my second click would be The Castle.

The Castle is one of the most charming films I have ever seen. It tells the story of a family who are pleased they live right next to an airport. In fact, they would probably leap at the opportunity to join me in the perpetual departure lounge.

Click 3
Next, having taken Gaw’s advice about the need to have something to do as well as something to look at, I would turn to this site, where I would be able to continue what I am sure will be a lifelong study of the Hungarian language (sadly a lifetime is not nearly long enough).

Click 4
Then, having completed my daily grammar and vocabulary study, I would move on to Dumneazu – written by the brilliant Bob Cohen, who is a musician and writer and inventor of the sadly-missed Dork Zygotian, witty observer of Hungarian life (to see some examples of his work, go here).

The Dumneazu blog would reinforce what I’d just learned, remind me how much I love Hungary and thus why I’m bothering to try to learn Hungarian in the first place, provide me with lots of music to listen to – mostly recordings of friends of Cohen’s, playing otherwise unheard pieces from the region – and also lots of pictures and descriptions of food, thus satisfying two of my major interests.

To cover my other big interest, literature, I would turn to my final two clicks.

Click 5
The first would be Anecdotal Evidence, a blog by Patrick Kurp, which he describes as being about the intersection between books and life. I have discovered so many bits of writing I would never have come across through reading this blog, and I also appreciate Kurp’s calm, reflective take on life, which I think would be very soothing in my new surroundings. My enforced idleness would also allow me to keep up with Kurp’s prolific output, which I find difficult to do in my normal daily life.

Click 6
In deciding my final click I had to make a choice between Project Gutenberg and the Poetry Archive.

While I would have the time to at last read many of the great works on Project Gutenberg that I have never yet got around to, I suspect that in my strange new life, I would often grow despondent and lacking in motivation and somehow still not get around to reading them. Therefore, in the end I picked the Poetry Archive, because it includes recordings. I think listening to the voices of Les Murray, Ted Hughes, PJ Kavanagh and many others would keep my spirits up in a way that text alone could not. As well as that, if I worked hard at it, I might be able to memorise a selection of the poems and then I would be able to start busking as a poetry reciter and possibly amass enough money to bribe enough officials to give me a means of escape to the outside world.